After the completion of the geological survey and the administrative preparation of the assignment, in March 2021, the company PW Energy has introduced the project for the utilization of geothermal energy for power production in the Prešov region.

Electricity generation will take place in a facility based on the ORC (Organic Rankine Cycle), with an installed electrical capacity of 6.3 to 6.5 MWe.

The power plant will utilize the energy using six wells (three production and three re-injection) in a closed loop with re-injection of the thermally exploited geothermal water, thanks to which the water will be reused in the production loop. And thus, in the first phase of the project, it is planned to implement a total of three doublets (designation of production + re-injection well).

The development of the geothermal center is planned in the cadaster of Ľubotice. The annual production of electricity in the first phase will be more than 43-thousand megawatt hours. The total potential capacity of the resource is estimated to be 3-times this size. Residual heat from the power production can be further utilized, in example for district heating supply, in agriculture, industry or for recreational purposes.

Drilling of the geothermal wells

Electricity generation will be possible thanks to the use of hot underground water. The geothermal wells will be located east of the city of Prešov within the Prešov basin. Collected geological data, preformed seismic survey and well logs from the ancient PS-1 pilot well indicate the existence of potential geothermal reservoirs at depths greater than 2,800 m.

According to the performed surveys and collected data, this location enables it to obtain inflow of geothermal waters with the maximum temperature range that is achievable in the geological environment of the pre-Tertiary basin subsoil (140 – 150 ° C).

A technically suitable drilling rig will be used for the safe and reliable drilling of the wells. The purpose of the first geothermal well next to the Prešov city, with an estimated depth of 4,000 m, is to verify the deep geological structures and geothermal potential of the target area.

The initial exploration well will be used as a production well once the parameters and capacity of the geothermal reservoir are confirmed, and will be utilized for the long-term exploitation of geothermal water for the production of green electricity.

What is an Organic Rankine Cycle (ORC)?

A condensing cycle for power production which utilizes the hot geothermal water as a heat transfer medium within the primary cycle. It transfers the heat from the primary into the secondary cycle where it heats the working fluid which has a lower boiling point.

The working fluid reaches higher pressure than the water and the produced vapors are led to the steam turbine, where they expand and turn the turbine which rotates and generates electricity.

After the use in the turbine, the steam is condensed into liquid in the condenser and then re-enters the process of being heated up by the geothermal water.

The expected annual use of geothermal water from one production well is expected to be in the amount around 1,749,600 m3 (a total of 5,248,800 m3 per year within the geothermal center), while all exploited geothermal water will be reinjected back to the reservoir after the utilization of its heat without changing its physical-chemical parameters except temperature. Geothermal water will not be discharged into surface streams. 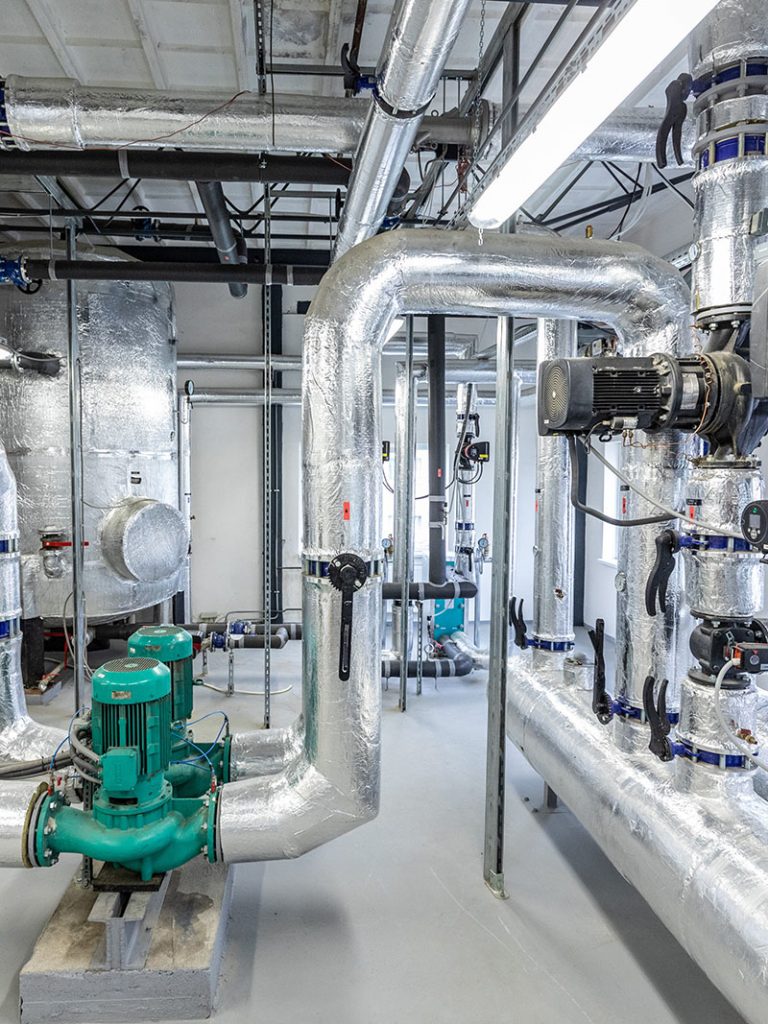